Have Thorpe Park slyly told us what to expect for 2022?!

During last night's Press Night for Fright Nights, we noticed several little references which could suggest what's in store for next year. It has been well advertised that this year is Platform 15's last year, and in the queue line themed posters say that the tour is being cancelled because the area is now "Under Development". This is coupled with a good chunk of trees being cut down around the surrounding area

More interestingly, within the Trailers maze is a message spraypainted on, simply saying TP RMC 22.

So, could this mean that there's an RMC roller coaster coming in 2022 to Thorpe Park, replacing Platform 15 and Loggers Leap?! In short, the answer is no. It takes a long time to build a roller coaster, and we haven't seen any plans for a new ride for next year either. Certainly, at this point, we would have heard something if a new roller coaster was opening next year!

We very much expect that "TP RMC 22" is just a fun little tease by the park for enthusiasts. And with this being Platform 15's final year, it is natural to assume that the area is "Under Development"...what for though, is anyone's guess!

Another interesting reference which can be seen at this year's Fright Nights is also in Trailers. Warning: Very mild spoilers! Throughout the maze, you walk through a cinema and into scenes from different films, and each film is based off a previous Fright Nights maze. Each scene takes places within a 'screen' at the cinema, and the number of the screen relates to the year that maze opened. For example, one film is Bozo's Playground, which is a nod to The Big Top - that opened in 2015, and so it takes place in Screen 15. Interestingly, there is a "Screen 22" shown, and opposite this is a poster for "Tutu's Revenge": 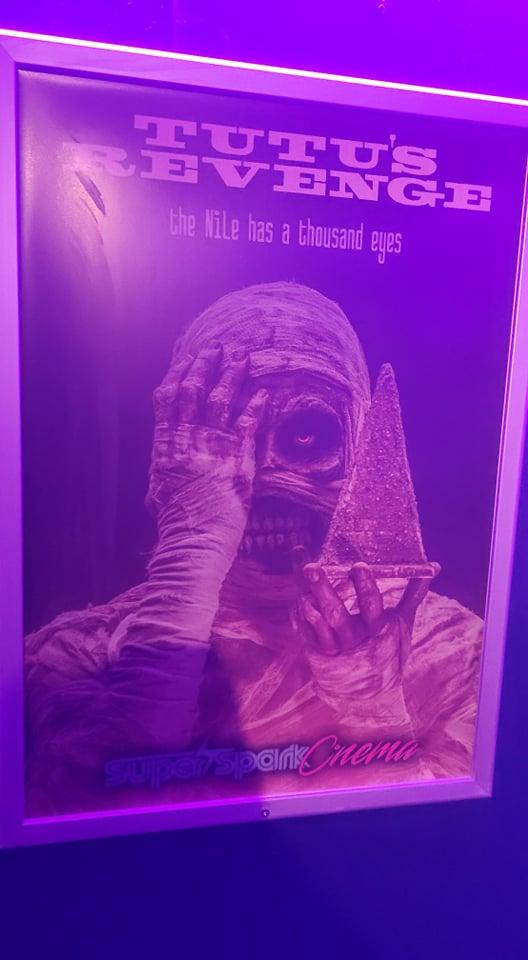 'Tutu's Revenge - the Nile has a thousand eyes' certainly doesn't reference any old Fright Nights attraction. And it is opposite Screen 22. So, could this be a little clue for what to expect at next year's Fright Nights? We don't know! Usually Fright Nights planning begins shortly after the previous event finishes (so early plans for Fright Nights 2022 would start this winter). But maybe an Egyptian themed maze is something the park have considered in the past, and might return to for the future? Or this could be a cheeky test to see if people like the idea of an Egyptian maze? Or maybe this is just another tease which doesn't mean anything except to get us fans over-analysing!

There's plenty of other Easter Eggs and references within Trailers too, which we will go into later!

What do you think could replace Platform 15? Let us know on our forums!