"Take A Flight Into The Apocalypse"
The Swarm

Thorpe Park have been well known to put in little 'Easter Eggs' and references into rides. This has been especially true in more recent projects. For example, in The Walking Dead: The Ride, the crashed van just before that station has the number plate "XNWO WD" - a reference to "X:\No Way Out", the first incarnation of the ride. The 'staff board' seen on the left wall of the pre show room features names of staff members who worked on the project. The park's latest Fright Nights attraction, Trailers, is one big homage to previous attractions, and features loads of little references too.

However, an interesting thing has cropped up in recent new projects. One word: Exodus. 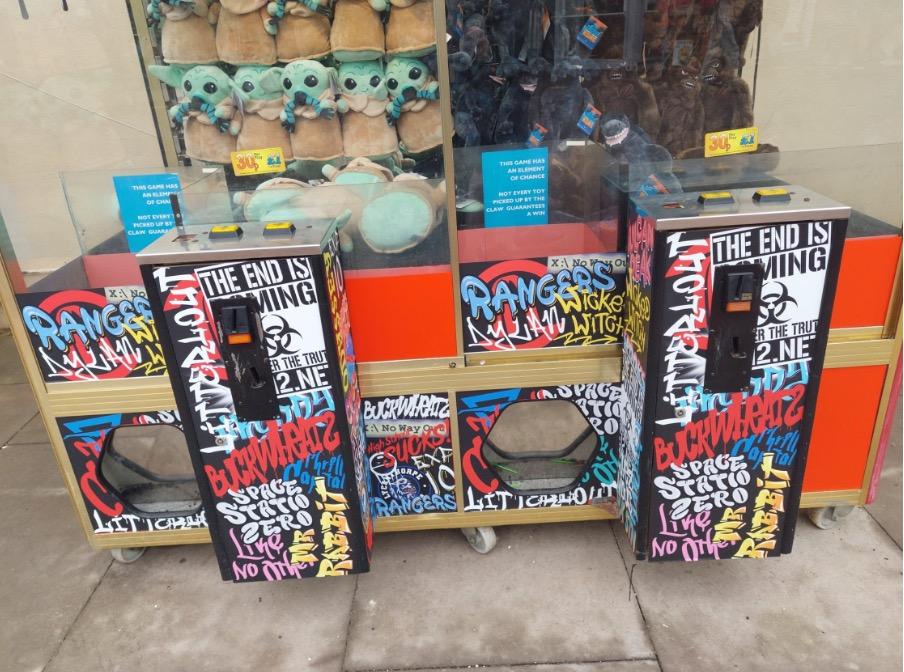 In late Spring of this year, the park decorated some of the grabber machines at the back of the Amity Boardwalk Arcade (opposite Ghost Train) with a 'grafitti' style vinyl overlay.

These wrapped around the entire bottom of the grabbing machines. They feature images of some old logos and posters (such as the original LC12 / The Swarm flyposters), and grafitti text of several old and new Thorpe Park related things (for example, the 'Buckwheats' from Creek Freak Massacre, and 'Dylan', the Project Name for Saw: The Ride). Interestingly, on the left hand side of the grabbing machine is the word Exodus:

To our knowledge, Exodus does not relate to anything related to anything from Thorpe's past or current line up! Of course, this by itself does not mean anything. This could just be something fun or different thrown in, something meaningful to the person who designed the graphics, or could even be related to an old Thorpe Park thing (and we just don't know that).

Appearing as a once off with no explanation doesn't give us much to be curious about. However, towards the end of Trailers, a poster can be seen for the film "X:\0-DUS". The poster features a man seemingly being lifted upwards by an unseen entity (as if being abducted), with trees in the background. Most of the film posters seen within Trailers have some relation to a Fright Nights attraction, or someone who worked on Trailers. X:\0-DUS seems to be the exception to this rule. There is an obvious reference here, with "X:\" linking to "X:\No Way Out". And thr abduction look of the poster could even be a reference to Swarm, themed around an alien race. But equally, the name can certainly be read like 'Exodus' too.

So the question is: What is Exodus? To appear in two different locations, both surrounded by lots of other Easter Eggs and references, certainly makes us think it means something. But we don't know what! We don't think it relates to anything that is currently at, or has been at, the resort. With work happening in Old Town and the area around Platform 15 now 'under development', could this be an early tease / Project Name for an upcoming new attraction at the resort? Or are the park just toying with us, like with their "TP-RMC 22" gag?

What do you think?