Last week, Thorpe Park introduced their newest event, Carnival, which will run all over summer. The park invited us to check out all the offerings, and with the event now fully underway, check out our veiws here! 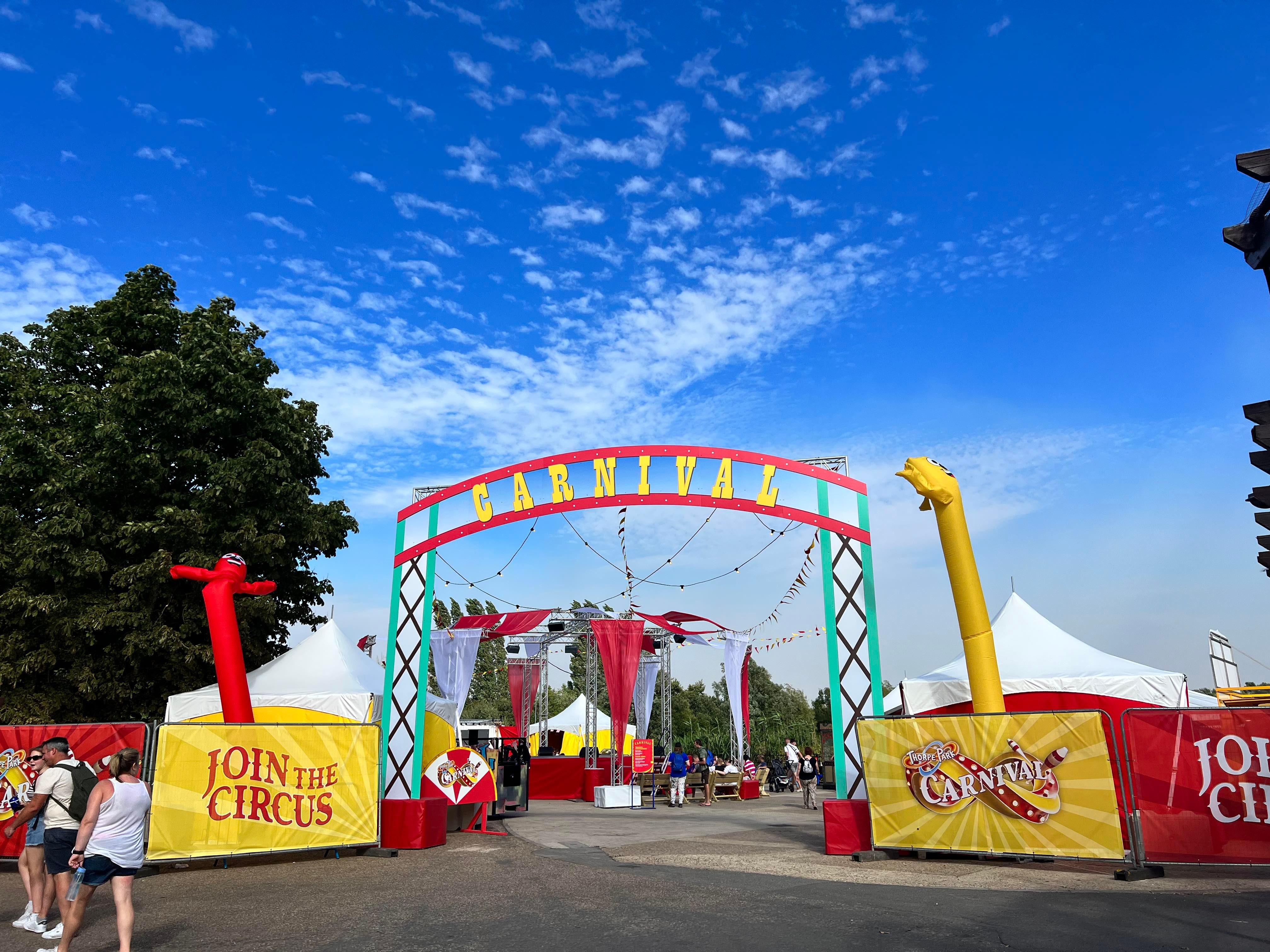 The key offering for the Carnival is on park entertainment. There are two main areas for the event, the first is located in the Lost City next to Zodiac, and is called the 'Carnival' area. It features a central stage, where a variety of acts perform from 12pm until park close. These include a variety of shows, the main one being The Ringleader Show. This show sees the ringleader of the carnival introduce a variety of the other acts that perform during the event, and is weaved in with a nice, easy-to-follow story.  Other feature shows include a Mime Troupe and The Flossers. The mime troupe are as one would expect - silent! - but still manage to let their personality shine on through, whilst The Flossers are a trio of singers performing a selection of songs.

One top of this, there are a variety of circus acts which take to the stage too, such as balance artists, a fire performer, acrobatics and more! Whislt the other performers are a part of the Resort Entertainments Team, these are external, professional, circus performers, which shows that care and money has been invested in make the event shine on through! This means that throughout the day, there's never long to wait for a performance on this stage, and there's always something to look forward to!

Also in this area is a Magician's Tent, who will perform slight-of-hand tricks to small audiences, and even a Fortune Teller, who can tell you your past, present and future with specially made "tarot cards". Be wary though, you don't want to find out if Bozo the Clown has been a part of it...

The second area of the event is the 'Junkyard' area, which is alongside Derren Brown's Ghost Train and stretches towards the Trailers maze. This features "carnival rejects" - clowns who are dressed shabbily and who don't fit the mould of the Carnival area, and they have a little bit of dark humour about them. These clowns also feature in the main Ringleader show too, and have their own regular Meet and Greets. On top of this, there were also lot of circus acts in this area too! 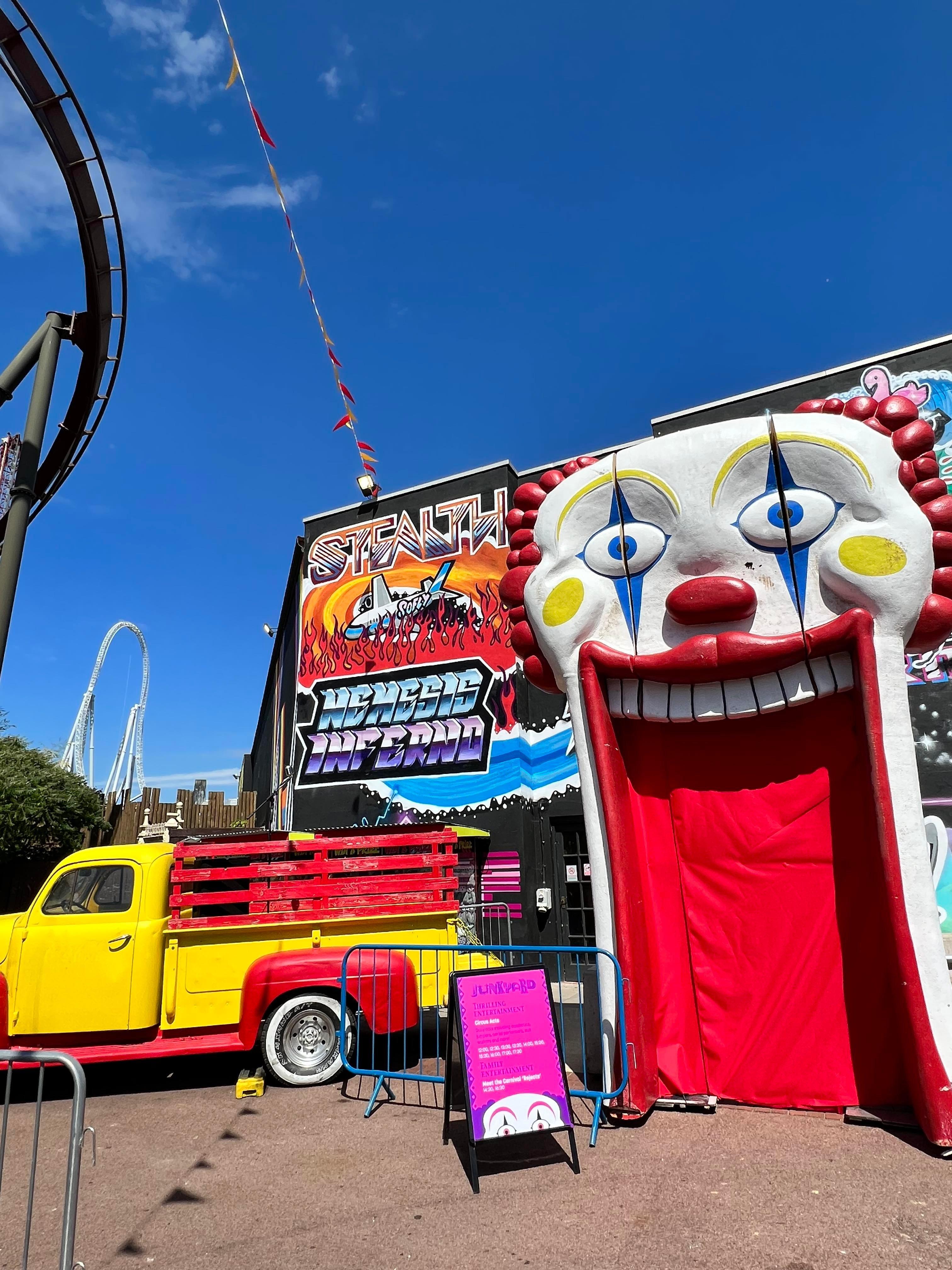 What really shone through with the entertainment on offer for the Carnival is how upbeat and fun it was, without it verging on too cheesey or corny. This is a hard thing to get right, but the resort have managed it really well! There really is something for everyone throughout the event, but even if it does not particularly interest you, it is also easy to bypass it as well, giving options for everyone.

The resort have also bought a slice of Fright Nights to the Carnival event, but with a more upbeat twist! Whereas the main Trailers maze is themed around a collection of horror films coming to life, Trailers: Breakout at Bozo's is themed more specifically around one film - starring Bozo the Clown - being able to come to life and escape into the other films. As a result, there are clowns throughout the entire maze! Whilst the layout is the same, there have been some small theming additions to the maze. It is also designed to be more lighthearted and family-friendly, with a recommended age of 8+.

Whilst the maze is not as intense as the Fright Nights version, and does feature less actors, it is still a fun and sensory-filled experience which is sure to whet everyone's whilst for the Halloween season to come. We believe that the park are aiming to adjust runthroughs based on each group too - for example, a tamer experience will be offered to groups with 8 year old children, whilst a group who looks up for a full-on scare experience may have an experience more akin to the maze they would see in October!

The attraction is open 1pm-5pm daily, and costs £6pp (or £4.80pp for Annual Passholders and Hotel Guests). Pre-booking is recommended but not essential, as - if available - you can buy slots on the day.

The park have worked hard to create a variety of commerical offerings across the resort for the event. In terms of merchandise, there is a pin badge, t shirt and lanyard featuring the Carnival logo. The park have also gone the extra mile and created a limited edition line reimagining Stealth as a "human cannonball" style Carnival ride, and have worked with Rob Yeo to see this come to life. The final result is a collection which seems to already have gone down an absolute treat with guests!

The park also have a selection of Carnival-themed food and drink options available, with temporary units in both Carnival-areas of the resort. These include a variety of sweet and savoury treats, such as dirty curly fries and corn dogs. The park have also teamed up with the Piglet Pantry group, who have taken over the old Cookies and Creamery food outlet...and they also offer annual pass discount here!

For a new event, Carnival feels really well polished and something which has been a part of Thorpe Park's event line up for years already. There's a wide selection of entertainment on offer, as well as additions both in terms of a scare maze and commercial offerings, which have been linked into the park really well. But equally, it is not an "in your face" event which interupts people's day, especially if it simply isn't your thing. The park have struck a really good balance here, and we think they're onto a winner of an event. There's themed audio at the park entrance and around the Carnival areas, created by Archie Stevens, to give a fun atmosphere across the park too.

The event is running daily until 29th August, with the park open until 7pm every day too!