"Are You Ready For The Cyclonic Forces"
Vortex

To celebrate 20 years since Colossus first started operation, we take a look back at this record breaking ride, which arguably was a big part in making Thorpe Park what it is today.

Back in 1998, The Tussauds group purchased Thorpe Park from the Ready Mix Concrete (RMC) company. RMC had opened Thorpe in 1979 as the UK's first fully fledged theme park, and for 19 years opened moderately successful rides such as Loggers Leap, Thunder River and Space Station Zero. Things started to change in 1987, when Chessington World of Adventures opened just up the M25. Featuring original, fully themed rides such as the Vampire, 5th Dimension and a direct clone of Space Station Zero, Thorpe Park had to push harder with their newer rides. Whilst Chessington opened Vampire, Thorpe Park followed up with Depth Charge. In no universe is that direct competition. In 1994, Alton Towers opened Nemesis, and in the following year Chessington opened Rameses Revenge. Thorpe Park looked to fight back with X:/ No Way Out, a Vekoma Enigma that would be the world's first backwards, in-the-dark roller coaster.

It's funny in hindsight to look back and see how fundamentally flawed the concept of X:\ No Way Out was, but back in 1995 when Thorpe were constructing the giant pyramid, their ambition to challenge Nemesis and Rameses Revenge has to be admired. As expected, things did not go to plan. X:\ No Way Out faced many budget cuts and planned concepts for the ride fell through. The ride itself suffered from a low throughput and the fragmented ride style, with trains stopping three times in the pyramid caused confusion for riders and even led to hasty a rise in the ride's height restriction as a guest assumed the ride had ended and attempted to get out. From 1996 to 1998, RMC attempted to go back to basics, opening up a new Dodgem attraction near the Dome and new bumper boats next to Thunder River. Whilst neither of these lasted very long, it's interesting to note that Thorpe Park won most family friendly theme park in 1997 and 1998. However, the park weren't doing well in terms of visitor numbers - they had lost over 500,000 guests between 1993 and 1998. Despite this, the park had created a lot of interest and many saw the potential, ultimately leading to Tussauds buying the park in 1998.

For a while, Tussauds had wanted to bring the successes of Nemesis down to its original Southern theme park, Chessington. Chessington had caused a huge outrage with Vampire in 1990; the noise of the ride's machinery annoying people living nearby. With the park on the London green-belt, adding a large-scale roller coaster proved to be a struggle. Various attempts had been made, such as a Bolliger & Mabillard inverted rollercoaster where Rattlesnake now lives, and the idea of a ten inverting, record-breaking roller coaster.

At this point in 1999, with Samurai opening at Chessington and Pirates 4D at Thorpe Park, the parks could have gone either way. A decision was made to completely change each park's target audience. Despite adding one of the most intense flat rides ever conceieved, Chessington was to become a family theme park, whilst Thorpe Park would start to cater for thrill seekers and teenagers. Tidal Wave begun this sea change. Whilst the ride had been in the pipeline during the late RMC days, Tussauds took it, twisted its pirate theme and came up with Amity Cove, a fantastically themed and fun area despite the idea of destruction. Tidal Wave was an unparalled success and pretty much sent the message that Thorpe Park was heading in a new direction. A fire hit the park during the summer, destroying Wicked Witches Haunt and Tropical Travels, two "fun for all the family rides". Even with this hit, the park came through easily, bringing in a temporary enterprise wheel from the local fair. If anything, it was this move that really set the wheels in motion. By this time, Colossus was well into planning anyway and with two thrill rides now already in place, it was time to get those wheels spinning faster.

THE BEGINNING OF COLOSSUS

It cannot be understated how incredible and shocking it was for Thorpe Park to be building a ride of Colossus' scale at the time. In the late 90s, the tallest ride on park was Loggers Leap, a fun - but equally fairly standard - log flume, and yet just a couple of years later, Colossus would dominate the park. But Colossus as it is wasn't the original plan the park had.

When Tussauds bought the park, part of it was because of the potential to build large scale rides significantly easily than Chessington. Plans quickly developed for a major new roller coaster, and they wanted it to open in 2001. The project was codenamed Project Odyssey, inspired by the film '2001: A Space Odyssey'. And unlike Colossus, the ride was planned to be a launch coaster.

In part inspired by the success of The Incredible Hulk roller coaster that had opened in Islands of Adventure in 1999, the park felt a launch coaster with multiple inversion would by a big statement-making ride. Possibly built by Premier or B&M, the ride would feature a cobra roll, vertical loop, other inversions and airtime, and be located where Colossus is now, and expanding over to where Rush and Zodiac also lie. However, the park had concerns about this. The ride's LIM launch system was set to be in a tunnel to help preserve it from the elements, but even then, there were concerns and cost and maintenance. Maybe a launch coaster was too big a step for now. So these plans, despite even being submitted to the council, were shelved.

The change of plans ultimately meant that Project Odyssey would be set to open in 2002, rather than 2001. This wasn't a major problem, with the park still able to push through with the addition of multiple thrill rides successfully. And fortunately, Tussauds already had an alternative coaster in the pipeline. As mentioned, they had already considered a 10 inverting roller coaster for sister park Chessington, but planning restrictions made this impractical. But for Thorpe Park, this was no such issue. And so plans were drawn up and approved, and so Colossus as we know it was born!

2001- THE CONSTRUCTION OF COLOSSUS

2001 is known as the year of sensory overload. The previously mentioned Enterprise from 2000 became a permanent resident in the park and was renamed Zodiac. A Fabbri drop tower named Detonator was purchased and placed directly in the centre of the park, roughly where Wicked Witches Haunt stood. And a KMG Afterburner called Vortex was added right next to the entrance of the park.
At the same time, large construction walls were put down next to the Thorpe Belle (which later would become Saw Alive). Colossus was coming. The world's first 10 inversion roller coaster.

Plastered on the park map was the chance for you to book your 2002 ticket for £12.50. If any ride was to change the future of the UK coaster industry, and Thorpe Park in general, it was this ride. The previous holder, Dragon Khan at Port Aventura had held the eight looping record for a good seven years and as far as records go, having 10 inversions was a real boast. It's a solid, round number and gave Thorpe Park's guests something to grab hold onto. As the park went into its closed season, construction raised up a notch with interactivity and track going in and over the ride's pathways, being the main appeal.

We are still working on getting together our archive of Colossus Construction. If you want to see some photos during that process, check out @thorpeparknostalgia on Instagram!

Colossus opened on a wet Friday afternoon, the 22nd of March 2002 to be exact. Enthusiasts scrambled to be the first to ride on Thorpe Park's new whammy of inversions. Sure, Alton Towers had opened Air, the world's first flying rollercoaster, but Alton Towers was established, and Air was temperamental in its opening.. Colossus was to be the ride that propelled Thorpe Park properly into public consciousness, and being such a simple ride system, it also worked.

2002 was an unprecedently popular year for the park. The park had its highest attendance figure at the time, with 1.5 million visitors coming. Many of course were coming for Colossus, but they stayed for the new selection of thrill rides that had been introduced in recent years, as well as the good family / filler line up the park had built up previously. And if they needed any excuse to return, construction of Nemesis Inferno was in full swing...

The first decade of Colossus were also the most exciting in Thorpe Park's history. The park had seen a dozen new rides such as Nemesis Inferno, Slammer, Rush, Stealth, Saw - The Ride and Swarm. But none of them have caught the public's attention in the way that Colossus did. They all added to the park and bought their own successes, but the buzz around Colossus was something that even to this day is unmatched. 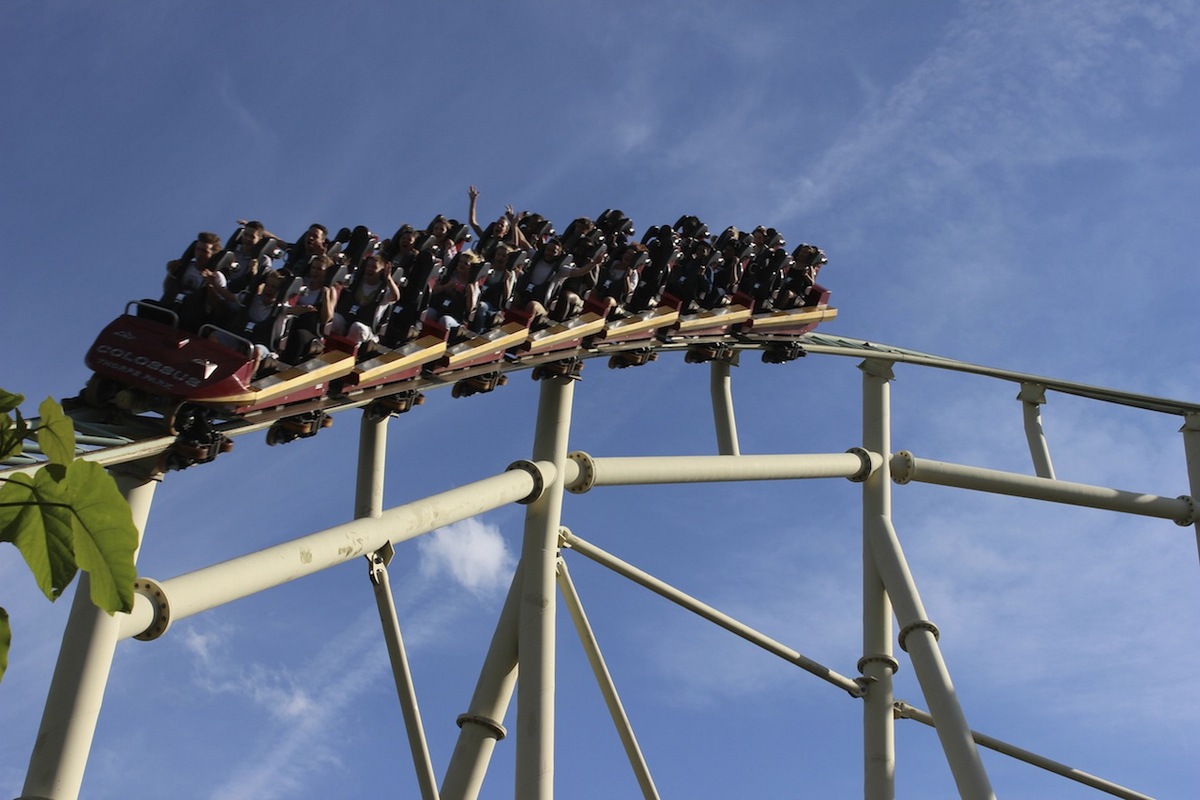 Sure, the ride had been through many changes over its first ten years. The trains were modified early in its life to stop people poking their legs out. Originally completing its quadruple twist sequence over water, it is now completely landlocked, following the introduction of Saw Alive in 2010. New fencing was been dotted around to also improve safety. But despite all this, and receiving criticism for being rougher or not as exciting as newer rides, it still drew excitement from the crowds, and held the world record.

The last ten years, Colossus has been surprisingly consistent and a strong mainstay in the resort's line up. Despite losing its world record to The Smiler at sister park Alton Towers, the ride can keep the bragging rights of the "First 10 inversion roller coaster"; a draw to this day still. But even then, it still hasn't escaped criticism either. The ride is regularly described as rough by frequent riders. It also receives criticism for its layout, since the ride got its the record by repeating inline twists on the backstraight of the circuit.
Compared to more modern rides, its layout might leave a little to be desired, but it still is good at what it does.

More importantly, no ride at Thorpe Park has the raw adrenaline that Colossus holds. It changed Thorpe's landscape forever.

Roller coasters don't last forever. Just look at Nemesis at Alton Towers: the park have recently applied for planning permission to give it a near-total retrack, including all of its supports. And that is just 8 years older than Colossus. The ground Colossus is on has also being shifting ever so slightly, hence why the park has tried concreting near supports in recent years.

It would be unfair to say that Colossus' days are numbered. The ride is still popular with guests, and is a largely reliable member of the Thorpe Park line up. But as it gets older, and with Project Exodus, a somewhat similar ride over twice the height of Colossus, coming next to the ride soon, questions must be asked about what comes next. With Merlin investing in retracking their older rides, such as Nemesis at Alton Towers and Shaman at Gardaland (Italy), maybe Colossus is on the retrack cards?

Whatever the future holds for Colossus, we know one thing for certain...It never leaves you! 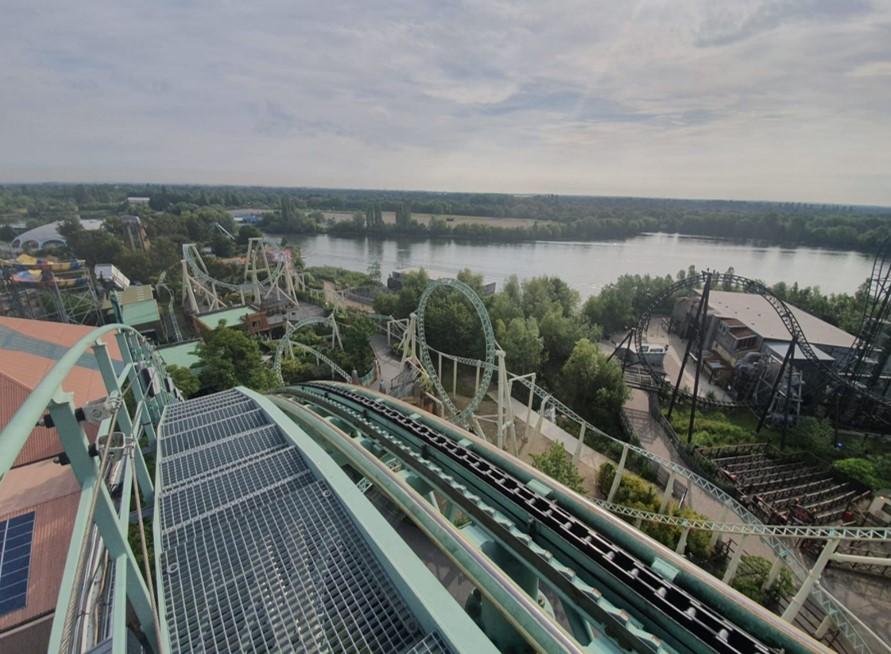